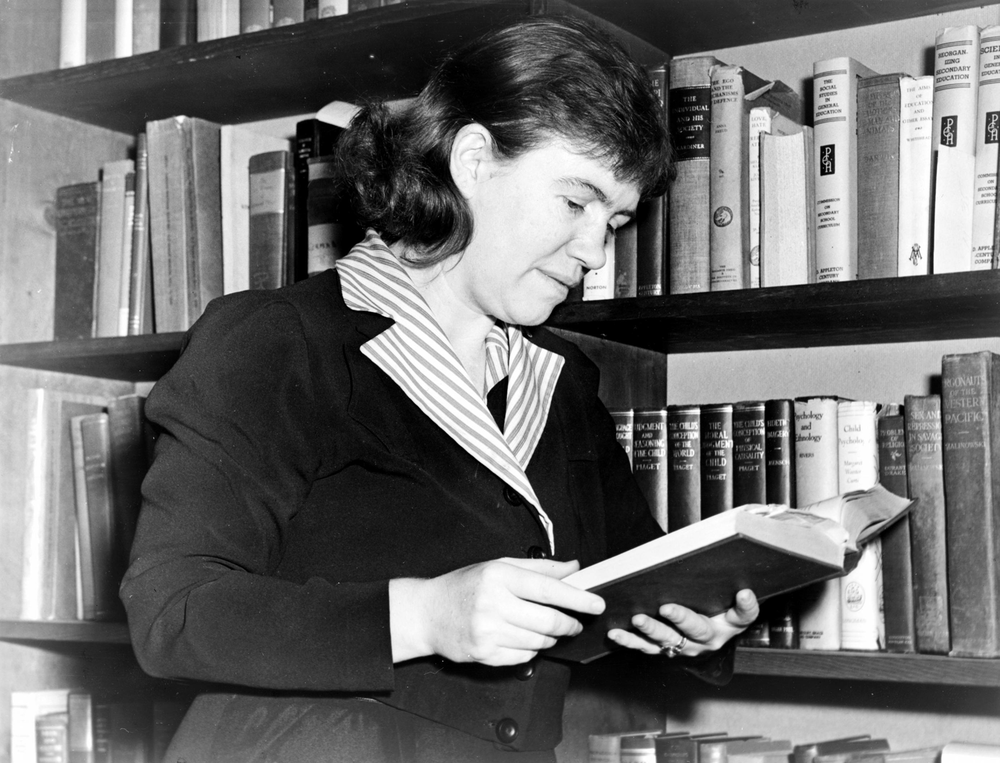 ♀ The Functional Freeze, the Feminine Protest, and Margaret Mead

This is the sixth post in my chapter-by-chapter analysis of The Feminine Mystique, as I read the book for the first time in an effort to educate myself about the roots of modern feminism. You can read the other posts here.

Yesterday I had a conversation about innate differences between the sexes—specifically: do they exist, beyond the obvious biological level? Since one tactic of feminism is to at least minimize the attention given to any differences between men and women, feminists tend to operate on a practical level as if those differences do not exist. And maybe they don’t. I remain skeptical about the whole thing, since I think most of the available evidence we have on the subject is tainted by sociological assumptions. Conclusive evidence may be practically unattainable. I do think, though, that society as a whole overemphasizes any differences that do exist, which I suspect to be at least fewer and less significant than most people assume.

In the previous chapter of The Feminine Mystique, Betty Friedan covered Freudianism and its contribution to the marginalization of women. In chapter six, she moves on to functionalism, the school of sociology that developed as Freud’s ideas moved into the mainstream. The functionalists attempted to make sociology more scientifically credible by “studying institutions as if they were muscles or bones, in terms of their ‘structure’ and ‘function’ in the social body.” (Friedan, Betty, The Feminine Mystique. Norton & Company, 1997, p. 127) This resulted in little actual progress, though:

By studying an institution only in terms of its function within its own society, the social scientists intended to avert unscientific value judgments. In practice, functionalism was less a scientific movement than a scientific word-game. “The function is” was often translated “the function should be”; the social scientists did not recognize their own prejudices in functional disguise any more than the analysts recognized theirs in Freudian disguise. (127)

While the functionalists moved beyond Freud’s view of “biology as destiny”, they only got as far as “societal norms as destiny”. Despite accurately describing social structures, they never critiqued them, contenting themselves with telling people how to “adjust” instead. (129) In this, they may actually be more culpable than Freud, who at least thought he was expressing a scientific, unchangeable reality. The functionalists acknowledged the potential for equality but dismissed it for reasons of convenience.

For example, functionalism correctly identified the social purpose of complementary roles in marriage—the husband responsible for earning money that would keep the family and household operating, the wife responsible for the actual operations. But it never moved beyond this fairly obvious insight to a deeper analysis of the system, except to point out that if the wife stopped taking care of operations the husband would no longer be free to fulfill his role:

When men and women engage in the same occupations or perform common functions, the complementary relationship may break down. (Bowman, Henry A., Marriage for Moderns. New York, 1942, p. 21)

This ignores the possibility of achieving a better future at the cost of short-term inconvenience or upheaval—a process I think may actually be underway right now.

The most influential of these thinkers, at least with regard to the role of women in society, was Margaret Mead. (Friedan 135) Mead completed extensive anthropological research among three different tribes in Papua New Guinea: the Arapesh, among whom both men and women displayed traits traditionally considered “feminine”; the Mundugumor, both of whose sexes were “aggressive” and “masculine”; and the Tchambuli, whose women Mead claimed were more dominant and independent (this claim has since been disputed). (136) Despite these findings, though, Mead did not (in general) advocate equality or eradication of gender stereotypes. In some of her writing, she hints at the possibility of gender equality:

Just as society now permits the practice of an art to members of either sex, so it might also permit the development of many contrasting temperamental gifts in each sex. It would abandon its various attempts to make boys fight and to make girls remain passive, or to make all children fight…. No child would be relentlessly shaped to one pattern of behavior, but instead there should be many patterns, in a world that had learned to allow to each individual the pattern which was most congenial to his gifts. (Mead, Margaret, From the South Seas. New York, 1939, p. 321)

For the most part, though, Mead skewed functionalist, particularly glorifying the reproductive functions in women. She even attributed the male urge to accomplish and create to a sort of “uterus envy”—a subconscious awareness that women were superior because of their ability to create and nurture new life similar to but opposite Freud’s penis envy. (Friedan 140–141) In her Male and Female, she asks:

If little boys have to meet and assimilate the early shock of knowing that they can never create a baby with the sureness and incontrovertability that is a woman’s birthright, how does this make them more creatively ambitious, as well as more dependent upon achievement?

In a way, this reversed Freud’s subjugation of women, portraying them as superior to men because of their reproductive function. But as any good feminist knows, essentializing one aspect of femininity still keeps women in bondage:

In her insistence that women are human beings—unique human beings, not men with something missing—she went a step beyond Freud. And yet, because her observations were based on Freud’s bodily analogies, she cut down her own vision of women by glorifying the mysterious miracle of femininity. (Friedan 145)

Mead’s emphasis on reproduction meant that she retained a belief in the importance of defined gender roles; women needed to be at home fulfilling the ever-so-important function of making and raising new humans. Moreover, because women were privileged with this role, they owed it to men to let them have the less-important but still necessary function of achieving and accomplishing.

This is what Friedan refers to as “the feminine protest”—an elevation of what society called femininity over masculinity, in opposition to the “masculine protest” that functionalists claimed led women who envied men to take on typically “masculine” characteristics. (127) In response to functionalism, particularly Mead’s writings, women embraced their “femininity” and ability to create life, making a lifelong pursuit of this gender essentialism. (147)

Mead eventually began to reject the real-life impact of this philosophy, though, lamenting in 1962 the “return of the cavewoman”:

Why have we returned, despite our advances in technology, to the Stone Age picture? … Woman has gone back, each to her separate cave, waiting anxiously for her mate and children to return, guarding her mate jealously against other women, almost totally unaware of any life outside her door… In this retreat into fecundity, it is not the individual woman who is to blame. It is the climate of opinion that has developed in this country….” (Mead, Margaret, American Women: The Changing Image. 1962)

But despite Mead’s contribution to the perpetuation of the feminine mystique, Friedan credits her with good intentions, and even—to an extent—positive results:

Perhaps the feminine protest was a necessary step after the masculine protest made by some of the feminists. Margaret Mead was one of the first women to emerge into prominence in American life after rights for women were won… And she was able to say with conviction: it’s good to be a woman, you don’t need to copy man, you can respect yourself as a woman… It was a step forward in the passionate journey—and one made possible by it—for educated women to say “yes” to motherhood as a conscious human purpose and not a burden imposed by the flesh. (Friedan 147)