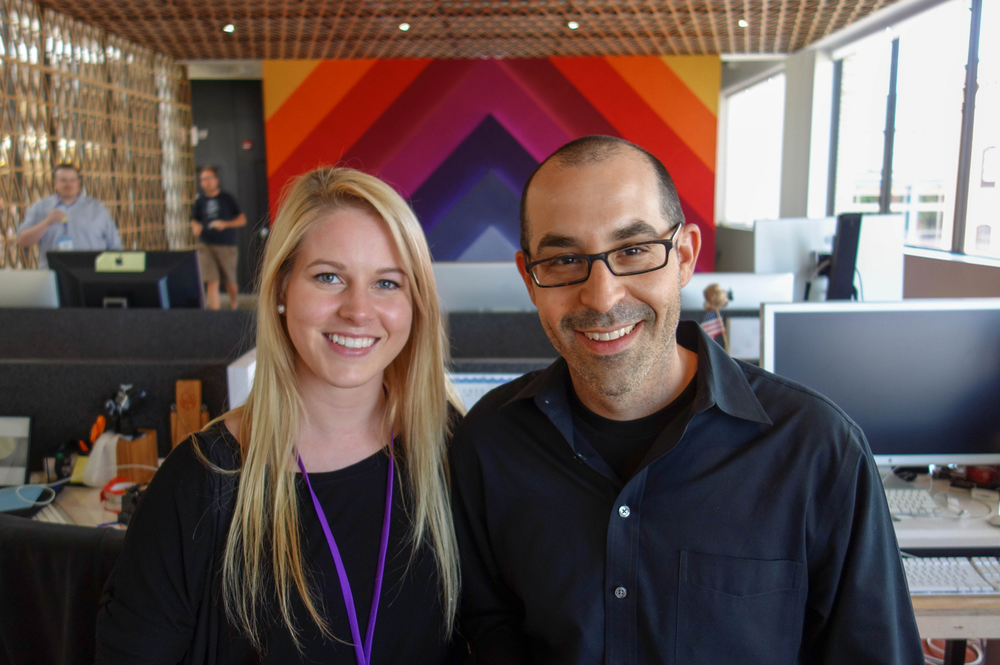 ♀ The Objectification of Haddie Cooke

Many of my real-life friends know that I love the podcasts produced by Dan Benjamin’s 5by5 network. In fact, they know it all too well; I can barely shut up about it, most weeks. 5by5 features shows about Apple1, software development, technology in general, music, comics, productivity, sports, and other sorts of geekery. One of these shows is The Frequency, a daily news show hosted by Dan Benjamin and Haddie Cooke, the network’s Associate Producer and Account Manager.

Dan and Haddie recently designed and sold a batch of 5by5 coffee mugs, and they shipped them out to buyers this week, packaging and labeling the mugs themselves at their offices in Austin with the assistance of their friend and occasional guest-host Shlok Vaidya. On Sunday, Dan posted a few pictures of this process to Twitter, including this one of Haddie and Shlok putting the mugs into USPS Priority bags. Not long after Dan tweeted the picture, one of his followers (a man) replied to it with “blonde girl is hot :)”. I won’t link to this guy’s Twitter account because I’m not here to shame him, but if you feel compelled to find out who he is you can look at the replies to Dan’s original tweet.

To Dan’s credit, he tried to subvert the offensiveness of this comment with humor by replying back, “HOT COFFEE IS HOT”. The guy then made an apology of sorts: “lol! No offense meant. She really is pretty though.” I assume he thought that the word “hot” was the objectionable component2 of his original statement.

The next morning, on The Frequency, Dan mentioned the incident, and he and Haddie spent a few minutes laughing about it. You can hear this segment starting at 1:44 in the mp3 file. Later, in the “After Dark” that follows the regular broadcast, Dan explained the comment as likely stemming from a mismatch between the sound of Haddie’s voice and the imaginary picture of her that the audience create in our heads (12:50 in the mp3). He also theorized that people don’t expect the host of a radio show to be attractive, citing the expression “a face for radio”. Possibly he was just trying to make Haddie feel less uncomfortable about the unwanted attention given to her physical appearance, but I think this theory is incorrect—or, at least, incomplete. Shlok Vaidya, despite being a young, conventionally-attractive man, received no comments on his physical appearance, as Haddie points out during the podcast. “A girl would never do that”, she generalizes.

We tend to laugh away this sort of behavior as just “creepy” or “anti-social”, and maybe that’s what public figures like Haddie Cooke need to do in order to be able to shake off the gross feeling such comments produce. She and Dan certainly made a number of jokes about the incident and even pretended to sympathize with Shlok Vaidya over the lack of attention paid to him. Alternatively, some women think remarks like this are “cute” or “sweet”—or at least, they pretend to think this so they won’t be perceived as frigid, prudish, or uptight.

But commenting in public on the physical attractiveness of a woman whose occupation has nothing to do with her appearance is not just creepy, and it’s definitely not cute. It’s a symptom of the pervasive subconscious belief that women exist for men to look at them. We define them in these terms; this Twitter follower’s first instinct on seeing Haddie was to objectify her, to make her a thing to be admired (or not, as the case might be), reducing her identity, with all its complexities, to nothing more than a body. Not content with doing this mentally, he made a comment about her in a public setting, inviting others to join him in admiring Haddie’s body. This implies a sense of ownership.

The unspoken—and, in many cases, unrecognized—belief that women’s bodies are public property has deep roots in our culture, and we program men to subconsciously “possess” every woman they encounter by objectifying her physically or sexually. For an extremely thorough analysis of how this issue affects young women, I encourage you to read this report by the American Psychological Association about the sexualization of girls.

I can certainly sympathize with any man who struggles not to objectify women; I do this myself, even about women whose many other good qualities I should appreciate. Much like Haddie’s admirer on Twitter, when I first saw a picture of Haddie on the 5by5 website I initially thought, “Oh, she’s pretty.” Unlike Twitter Guy, though, this is a behavior I am actively trying to change, so I reminded myself that Haddie is much more than a body. She is Dan’s producer for all the shows he hosts and the account manager for 5by5’s many sponsors. She is the only co-host of a show who is a member of his staff; in fact, I think she is the only full-time employee of 5by5, and Dan gives her responsibility, appreciation, and respect commensurate with her position. She has opinions, skills, quirks, likes, dislikes, and a full, three-dimensional life I can hear hints of on the shows she hosts. Reducing her to her appearance insults her and lessens me. I love listening to Haddie, and this would be true even if she were unattractive. So my second thought when I saw her picture and registered her physical appearance was a prompt to myself: “Who cares?”

I’m pretty stereotypically hetero and visually-oriented when it comes to women and sexual attraction. If I can work on recalibrating my mental attitudes toward women, other men can, too. This may not seem that important—Haddie doesn’t know, or probably care, whether I objectify her—but I plan to have children one day, and I want to pass on to them healthy, respectful attitudes toward women. Moreover, mental frameworks have a way of coming out in our speech and actions. If I view women primarily as people, not bodies, I will speak and behave differently than if I make a habit of objectifying them. And who knows what effect my speech and actions have, or how I might slowly and steadily influence others to think differently by making subtle adjustments to my paradigm? This is my feminism, and the feminism we need from every man: a constant war of attrition against patriarchy that begins with me.

Update: “Twitter Guy” has pulled his replies to Dan Benjamin’s tweeted picture of Haddie Cooke and Shlok Vaidya because he agreed they were offensive. He has also apologized to Dan on Twitter for posting them in the first place.