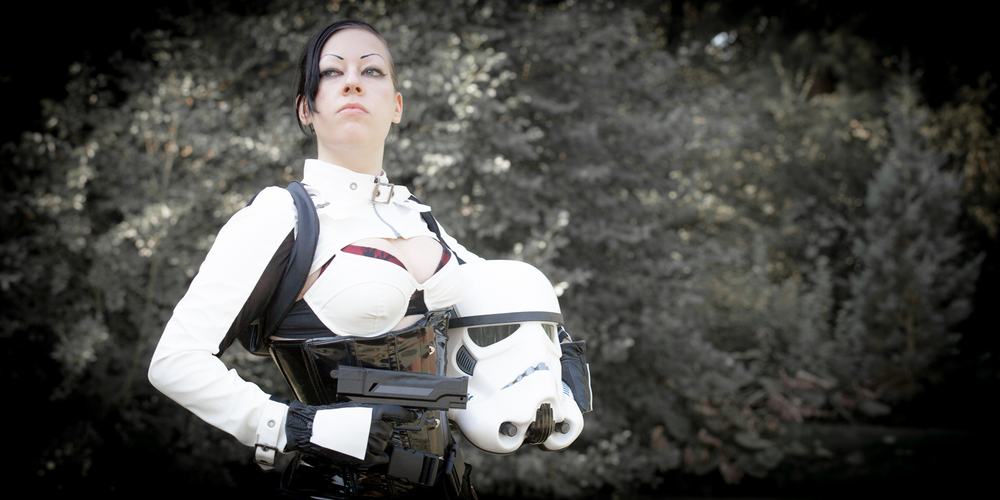 ♀ I Find Your Lack of Sense Disturbing

Earlier this month Wired published a piece by Laura Hudson called “Leia Is Not Enough”, on the dearth of notable female characters in the Star Wars saga in particular and movies generally. It’s a great article, and you should go read it right now, but in case you don’t, here’s the crux:

As great a character as Leia was, however, she was functionally the lone representative of the female gender in a larger Star Wars universe where every other character moving the plot forward was a man. It’s even sadder when you consider that the dearth of women who play important roles (or any role at all) in the classic George Lucas films from the late ’70s and early ’80s echoes a problem we still have today: Women are dramatically under-represented in films and media.

And they’re even more poorly represented in roles where they are driving forces, not just ancillary characters or love interests for male heroes.

If you’ve never really noticed the absence of women in Star Wars (or movies at large), consider yourself living proof of how the limiting narratives of culture and media can warp our expectations, to the point where the presence of one woman in a cast of dozens of memorable male characters can seem like perfect equality.

A few days later, Noah Berlatsky of The Atlantic’s new “The Sexes” section published a critique of Hudson’s article. While he agrees with her broader point that Hollywood needs to better represent the female sex in mainstream movies, he thinks Star Wars itself needs to push beyond the boundaries of the gender binary, so simply including more major female characters will not suffice.

Star Wars’s lack of women seems linked to a deliberate lack of interest in women. The film franchise is designed to be a series of male genre pictures, and for proof, all you need to do is look at the innovative, non-traditional approaches to gender other sci-fi works have taken—which Star Wars and other Hollywood films avoid.

I won’t deny that seeing some gender-bending science fiction would be interesting, but Berlatsky’s logic is flawed for two reasons. Firstly, he argues that Star Wars faces an obstacle to broader female appeal fundamental to its genre, which he identifies as “boys’ adventure”. Critics have generally agreed that Star Wars is essentially a Western set in space, with accompanying technology. It’s about gunslingers, and everyone knows only boys like movies about gunslingers, amirite? Of course not, and Berlatsky knows that’s stupid, so before proceeding he pays lip service to the idea that girls are allowed to like action movies, too.

The series is devoted to battles, adventure, politics, more adventure, and more battles. Girls certainly can—and certainly do!—like all of those things.

Then he undoes it:

Genre and gender, then, are tied up together. Sci-fi imagines different worlds—but those different worlds are governed in no small part by particular narrative expectations. The galaxy isn’t as far away, nor as teeming with possibilities as it looks.

This makes no sense, even within the context of Berlatsky’s own argument, because just a few sentences before this he takes care to point out that sci-fi opens up new worlds free from the cultural baggage of our own:

If Star Wars were the Western that it in many ways imitates, then of course you wouldn’t necessarily expect there to be lots of female gunfighters, because gender roles back in the time period when Westerns are often set restricted what women could do. But Star Wars isn’t a Western; it’s a science-fiction story, which means anything goes.

So, to review: even though Star Wars belongs to a genre that typically panders to boys, it could change the rules of that genre because it’s also sci-fi, and sci-fi has no boundaries, but it can’t change the rules of that genre because of our cultural boundaries. Also, even though girls can and do like action/adventure, Westerns, gunslingers, and the like, girls will never really like Star Wars because that genre is for boys.

This is all nonsense. A film, or series of films, doesn’t have to pander to boys[1] just because other films in its genre traditionally have; in fact, Star Wars has already stretched the boundaries of the Western/adventure movie genre by setting it in space. The way that Star Wars actually panders to men is by casting mostly men; women would probably like Star Wars better if they saw more women doing all the gunslinging.

Having backhandedly reinforced gender stereotypes, Berlatsky proceeds to argue that Star Wars should emulate other, edgier works of science fiction literature by playing with the boundaries of gender itself.

Way back in 1969, Ursula K. Le Guin’s The Left Hand of Darkness imagined a planet where the human-descended inhabitants had only one sex; it is only during the monthly mating time that they take on gender identities and sexual urges. In Octavia Butler’s Xenogenesis trilogy (1987–2000), a post-apocalyptic Earth is invaded by aliens with three genders. There are males, there are females, and there are ooloi, a sex of genetic mixers and manipulators, who are able to mate with, and thereby reengineer, human men and women. More recently, Brian K. Vaughn and Pia Guerra’s comic book series Y: The Last Man imagined a world in which a plague had wiped out all males on earth except one.

Those stories all sound cool and interesting. I wouldn’t be at all upset if Star Wars ventured into exploring this sort of territory, and I don’t think there’s anything stopping the producers from doing so. The series could include elements like this without straying from the action/adventure genre, although Berlatsky does not appear to think so:

You could certainly argue, I suppose, that the public wants space opera and not gender exploration—Han Solo shooting storm troopers rather than tentacle brain intercourse with aliens. To me, though, looking around, it doesn’t seem especially clear that violence sells better than sex.

Firstly, I think this underestimates the Star Wars franchise, which is more than dumb, schlocky action; the films’ ability to include substantial thematic material without needing to compromise the fun contributes to their lasting appeal.[2] Secondly, the sort of gender exploration Berlatsky seems to be advocating isn’t “sex”; it’s sociology. Watching ooloi re-engineer humans through sexual intercourse would be fascinating, but it wouldn’t get me turned on. I don’t think it’s prurience that keeps mainstream sci-fi movies from engaging with these kinds of subjects.

In any case, this whole argument that Star Wars needs to push the envelope on genre misrepresents the mainstream of feminist goals. We don’t need androgyny, asexuality, or polyamory to be portrayed as the norm; we mostly just need equality between the sexes. Putting more women in the roles typically occupied by men would go a long way toward achieving that. If “anything goes” in sci-fi, Star Wars can certainly do a simple thing like cast more women.

This whole article is such a mess, it’s hard not to think that Berlatsky manufactured a controversy just so he would have something print in response to Hudson’s article.[3] It wouldn’t be totally surprising for him to opportunistically miss the point of a feminist message. Even if his criticism is genuine, though, I disagree entirely. We don’t need every work of literature to accomplish every worthwhile goal. Star Wars does not need to engage in hard-core gender-bending; it can just be a good space opera, but it should be an egalitarian one; considering the scope of the Star Wars universe, gender parity seems a reasonable baseline to require. And people—particularly those who, like Berlatsky, write specifically about sexual politics—need to stop reinforcing stereotypes about what women do and don’t like; that sort of behavior is why we need feminism in the first place.

Photograph by Qsimple via Photopin (cc)